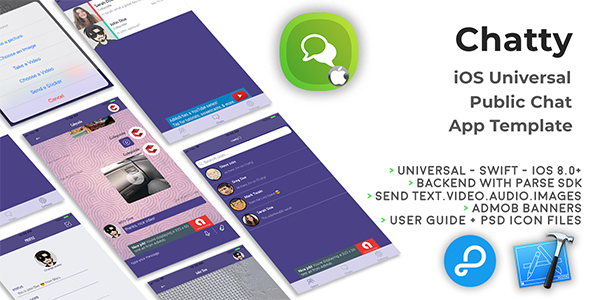 Chatty is a Universal App Template for public chats anywhere you are.
Users can send text, audio, video, and image (including stickers) messages, favorite chat messages into the Settings screen, update their profiles and set a chat wallpaper.
You can block/unblock users by swiping a user’s cell left and tap the Block/Unblock button.

Since its backend is by Parse Server, you don’t have to buy any domain/hosting, there are NO PHP files to upload to a web server so you’ll save some money for server side.

About Parse SDK and back4app

Read this article for more info about back4app and Parse SDK: https://hubpages.com/technology/Parse-SDK-will-not-shutdown-in-thanks-to-back4app

Can I host Parse Server on my own server?

Yes, although I don’t provide support for the setup process, you can read the official Guide here: http://parseplatform.org

I get a Code signing error in Xcode 8.x

That’s a bug of Xcode 8 with macOS Sierra, check this sample video to see how to fix it: https://youtu.be/z2LemT1_LqA

How to remove AdMob banner ads

Check this video out to see how to remove the code that shows AdMob banners: https://youtu.be/e-HQYnta2Jg

Keep in mind that you must repeat the shown steps for every .swift file that contains this line on the top:

Why do I need to have login from Apple Account in the app?

Important Disclaimer: We’ve recently found out that some developers have bought our app templates, reskinned them just a bit and put them on sale on other source code markets similar to CodeCanyon, saying that they developed and own such source codes.
That is a serious copyright infringement, developers who buy our templates are allowed to reskin and sell them as apps on the App Store (accordingly to the License type they’ve purchased a template for) but are not allowed to put our original source codes for sale on source code markets, including CodeCanyon.
We will report developers who made copyright infringements to the competent authorities.
Thanks.