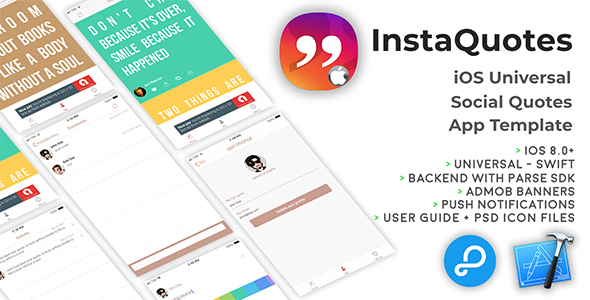 Both iOS and Android versions can share the same Parse database

InstaQuotes is a Universal App Template where you can post your own quotes and sayings and get involved in a funny community.
You can also browse posts from other users, see their profiles, like and share their quotes to popular social networks.

InstaQuotes has also Push Notifications for likes and comments, it is a native XCode project, Swift language, Storyboard, Universal, super easy to customize, backend with Parse SDK hosted on http://back4app.com

About Parse SDK and back4app

Read this article for more info about back4app and Parse SDK: https://hubpages.com/technology/Parse-SDK-will-not-shutdown-in-thanks-to-back4app

Can I host Parse Server on my own server?

Yes, although I don’t provide support for the setup process, you can read the official Guide here: http://parseplatform.org

I get a Code signing error in Xcode 8.x

That’s a bug of Xcode 8 with macOS Sierra, check this sample video to see how to fix it: https://youtu.be/z2LemT1_LqA

How to remove AdMob banner ads

Check this video out to see how to remove the code that shows AdMob banners: https://youtu.be/e-HQYnta2Jg

Keep in mind that you must repeat the shown steps for every .swift file that contains this line on the top:

Why do I need to have login from Apple Account in the app?