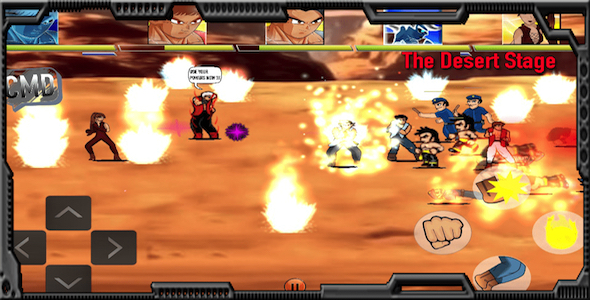 
How to Reskin & Launch this Game Video: https://www.youtube.com/watch?v=9zDGNqNtl8I
Our New Sprite Editor to edit the characters: https://store.bluegamerzstudio.com/downloads/new-sprite-editor

The above video gives you a complete guide as to how you can run this game in Eclipse and Xcode. It also guides you to repack the game as your own and launch it to Google play.
This game can be played by 2 players on the same device. Awesome game play. A classic Little Fighters style gameplay. This awesome game is made with a completely free Cocos2dx Platform. Very easy to Reskin. We recommend you use “Spooky Any Spritesheet Extractor” to edit the sprite sheets present in the Game.
The package contains Android Eclipse Project and IOS/Mac OS Project.

Ads integration only present in Android Version. No Ads in IOS Version. Admob and Adcolony Video ads are included for Android.

All character shown on the Play store and App store are present in this package.

This game is live on App Store, Mac App Store and Google Play.

Game Story:
This is one of the Best Multiplayer Games which you can play on same device easily. Remember the old games like Tap Tap Revenge? or Guitar Hero? Now this game also give 2 users to hold the device and fight the bad guys with Ki attacks. Multiplayer game is best suited in Tabs. Or bigger screens. But This game supports both multiplayer as well as single player. In Multiplayer only 2 players can play at a time on same device. Do check the controls to get more idea. Also you can play it on PC.

Get your friends and cross the stages together. With lots of Cannon fire powers and Main Boss mode. This RPG Game will give you the best experience in Anime Fighting style category. Explore more and more things which you can do together with your friends. And if you have any suggestions then do write to us below in reviews.

Kung fu little fighters is a full team action pack game. It has 6 stages with lots of bad guys.
An action pack game with lots of fire power and Ki attacks.
Total of 5 fighting characters.
Jon (The Hero of our game)
Don (Evil brother of Jon)
Dark Don (Don Transformed)
Tia (The Awesome Girl Power)
King of Fighters Krio (The Outlaw Hero)
If you can punch your way out of them then you could be fighting a fully charged evil Monster side of yours. The big boss is waiting for you at the end of every Stage.
Do not go and fight the bad guys all alone, take your friends and command them to do the right thing.
Punch and Destroy every one on your way.
Your Power Ki will clash now so make sure you are not in the other’s way.
2 types of Powers, Small power and Big power. Keep an eye on Power Meter. Once its full you can
release the Big Powers.
You can play this game like any other tower of defence game. Defend yourself and keep yourself out
of danger. Be Tactical in every move. You can kick or you can punch like a Boxing your way out.
Kung Fu Little Fighters is a fighting game which gives 5 choosable characters. Let your Fatal side out. Show your Fury to everyone. Wrestle your way through lots of Bad Cops or Bad Little Fighters.
A Story Adventure where you and your 4 team members get to fight against the bad cops.
1 Unlockable character Krio.

Game made with Cocos2dx V3.5 Easily upgradable to any latest version of Cocos2dx. Very easy to Reskin. We will love to see this game made by you. We will showcase your game on our Facebook page. https://www.facebook.com/dragonlittlefighters/